At the entrance of the temple the architecture and the beautiful wooden carvings on the iconostasis will impress you. The iconostasis in the temple is where all of the icons are placed on. The artist used lime-wood because it is soft and easy to work complicated patterns on the wood. Also its very durable and can last for many years.

On the iconostasis you will see beautiful carvings and illustrations of a large selection of animals and vegetation all representing nature. There is also one interpretation of Noah’s Ark. On top of the Holy Gate, we can see Noah lying down and relaxing.

At the center of the Holy Gate, we can see a mermaid (taken from Ancient Mythology), which illustrates the mermaid turning all of the bad elements to stone and keeping them out of the Holy grounds.

On some of the other icons we can see some large birds, with curved beaks. Hanging from these beaks are the olive-oil lamps. The entire iconostasis had been plated with gold sheets.

The iconostasis was created during the 17th century. Work began in 1720 and was completed approximately 60 years later. The gold plating took place in 1793.

This magnificent iconostasis in the temple was assembled by craftsmen from Hipiros. In some sections holes were purposely created so that sunlight can enter through the back windows.

The name of this style is called “Skiaroskouro” (which means to move shadows). On the iconostaies the peacocks symbolise pride. The doves symbolise peace, the octopus with the shells symbolises fasting, which is an important part of the Orthodox religion.

On the first row of the iconostasis at the bottom side, you will see flower pots and filled vases. On the top side you can see the icons of the Virgin Mary Panagia, Jesus Christ, Saint Ioannis Prothromos, and the silver plated icon of Agia Marina, which is renowned for its miracle working.

During the olden times, people were coming from Constantinopole and Russia to pay their respects to this icon. One of the offerings from Russia is the golden embroidered tomb cover, which is situated on the right wing of the temple.

On the next row, we can see sacred paintings and Byzantine art and icons, relating to religious name days, which were painted by Monks from Agio Oros “Athos” ( which means Holy Mountain), during the 17th century.

On the last row you can see Byzantine icons illustrating scenes from the Old Testament. The three sections of the temples’ roof are separated by columns that are wooden (from chestnut) and are covered in plaster.

They are painted with geometrical forms, so that they actually look like one-piece columns. On the arches you can see sacred paintings of the Prophets, Saints and various other decorations. On the right wing on the ceiling you can see the sacred painting about Jerusalem. On the left wing on the ceiling, the monasteries of Athos and Meteora are represented. 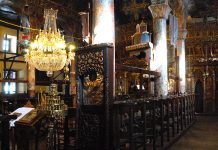 How would you come 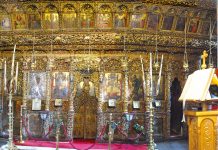 The Life of St. Marina 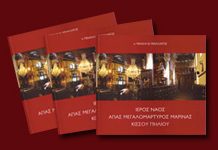 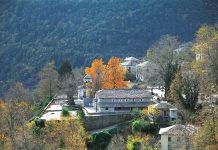 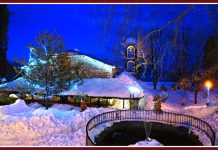